We're off to a really great start this season! Here's what we did at today's meeting, please take the time to read it all if you did not attend and take a look at the end to see a preview of tomorrow's meeting:

How We Are Ranked at Competitions

Our ranking at competitions is determined by how many ranking points (RP) we have compared to other teams. While winning (getting the most points in a match) can score us 2 RP, there are also other ways we can get RP:

Doing both of these things and losing still gives us the same amount of ranking points as just winning, meaning they are more important to our success.

Also, in the quarter-finals of competitions, the top 8 teams get to be the "alliance captains" and choose which teams' robots to pair up with (3 per team). That means two things:

Therefore, it's more important that our robot is consistent rather than able to do the most stuff.

We split into groups and came up with ideas about the different aspects of the robot. Then, we regrouped and shared. Here were the main points of the discussion:

Based on the self-reflection sheet that we filled out a few weeks ago, here are the assigned groups for each role. If you do not see your name on the role list, want to change your role, or have any questions, let us know over Remind or at the next meeting that you can attend.

Only having one role is recommended, but some groups are busier at different points in the season, so floating between them is possible.

There were also extra roles that were assigned based on the self-reflection. If you want to join or change between any of these roles or have any questions let us know either at the next meeting you attend or on Remind.

Thank you guys so much for being an awesome group, hope to see you all tomorrow! 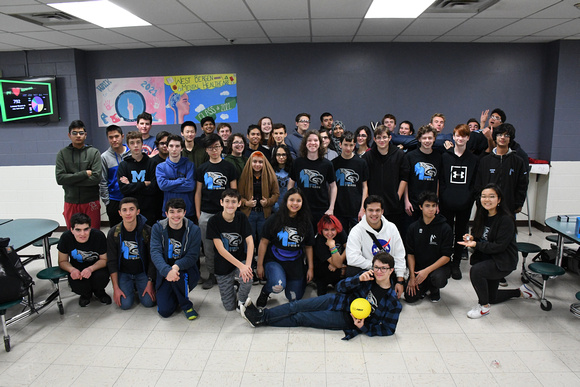 P.S. : you can find high quality photos of the team throughout the year at mikewongphotography.com